A Bit of Pillow Talk (or Cushion Chat)!

Off I went to delve in my box of UFO's and the lucky project this month was to make a pillow for my younger son, Simon, from some penguin fabric I bought a couple of years ago. He has a soft spot for penguins and I remember I bought the two penguin fabrics for a song on equilter.com in a clearance sale.  Given that he is now 17 (almost 18) I checked to make sure he didn't think the fabric was too juvenile!  He has a great sense of humour and still liked the fabric so yesterday and finally got my stuff together and made it.

This was one of those jobs that has been on the 'to do' list in my head for a while but for some reason I just never started it.  I picked up a couple of cushion inserts at the beginning of the year so I would be ready to go when its number came up.  Well, as is often the way with projects you put off for a long time, it came together in no time flat and here is the finished pillow: 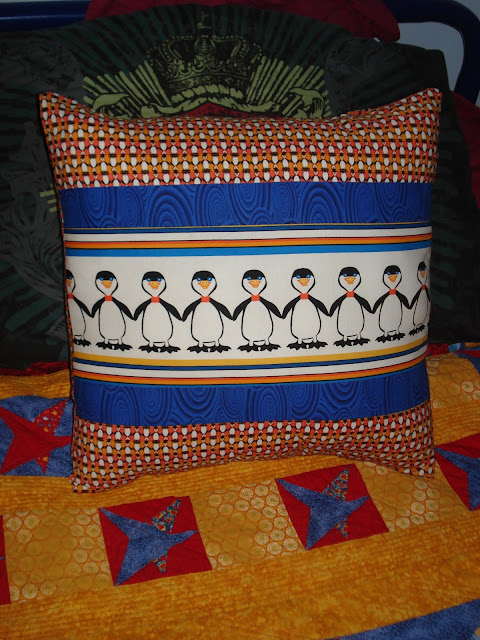 Aren't they a cute lot of penguins? They're cheeky looking with a definite glint in their eyes! I still have a lot left, not sure what I'll do with it but, hey, its not like its going to go off right?! Anyway, its hard to see but the orange fabric at the top and bottom is actually rows of penguins as well, albeit quite small.  I've used that fabric on the back as well (which I neglected to take a photo of but is a simple envelope opening).

I chose to use the blue fabric specifically because it is used on the border of his bed quilt so at least there is some connection between the two.  That and its a fabric I have a soft spot for (not much left now though). 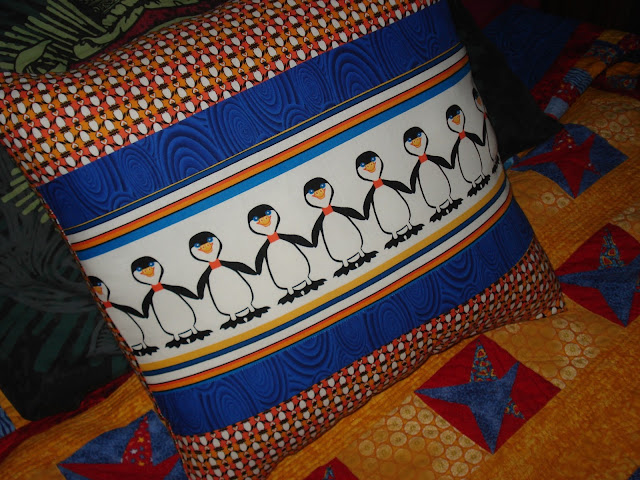 I have a soft spot for Simon's quilt as it was my very first - it started as a cushion cover to see if I liked the process and after quite a long (or rather LOOOONG) time it finally got finished. Its all paper pieced and I quilted it all myself.  I learnt a lot in the process! (There is a very early blog post about it here if you're interested but be warned its lacking a bit in interest!) 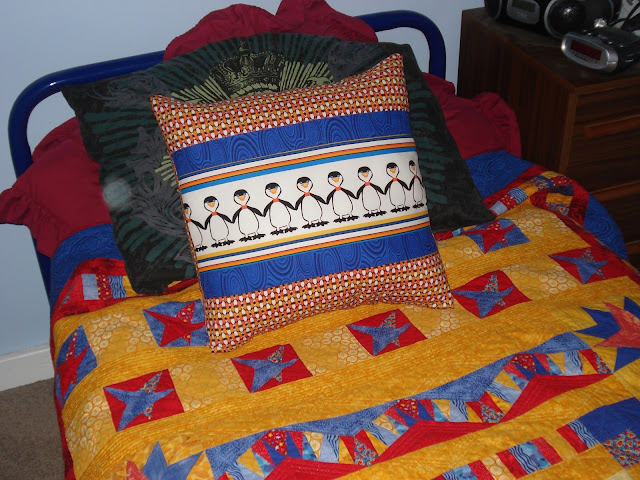 Well seeing as that pillow was so easy I decided that in the interests of fairness I would pull out another UFO and get stuck into that.  Why you ask? (or maybe not ask!) Well the other UFO was to make a pillow for my oldest son, Kieran, so being as I was in the pillow frame of mind I thought best to strike while the iron was hot! (Remember I said I bought a couple of inserts?!)

When I made Kieran's bed quilt (Fortune Dragon Quilt), I made 5 Chinese symbols but ended up only using 4 of them.  My loose plan was always to make a pillow using the last one but after working on the quilt for at least 2 years, and thinking 'dragons' for a number of years before, I was kind of over the whole theme!  Don't get me wrong, I LOVE the way this quilt turned out, but I just didn't want to look at the fabric anymore for a while! 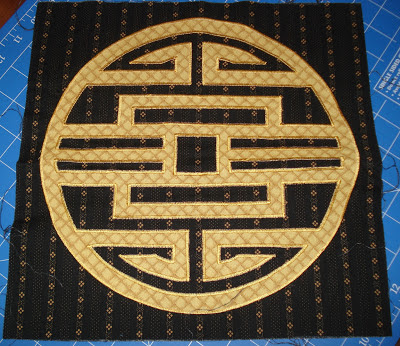 However, yesterday its day finally came.  As luck would have it my son was actually home so I was able to consult with him about preferred fabrics (of the two boys he is definitely the fussiest!) and away I went.  In an embarrassingly short amount of time his pillow was also complete.  I think stuffing the insert into it took longer than making it!  He was very happy with the result though (and so was I). 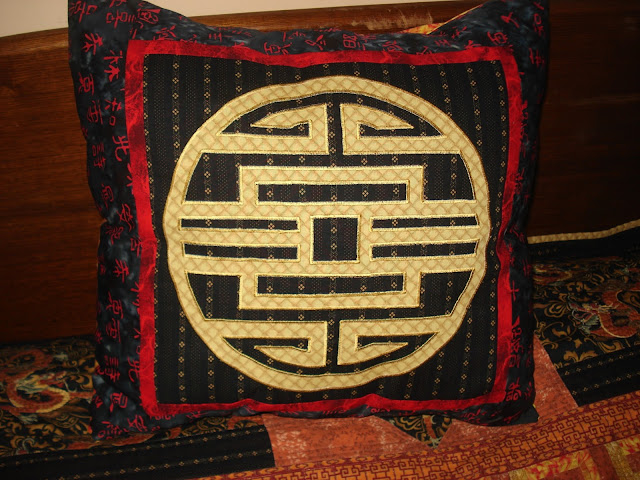 This one ended up with another favourite fabric - the deep red in the narrow border above. It is just the best red fabric and I really wish it was still around.  I'm rationing the tiny bit I have left now! 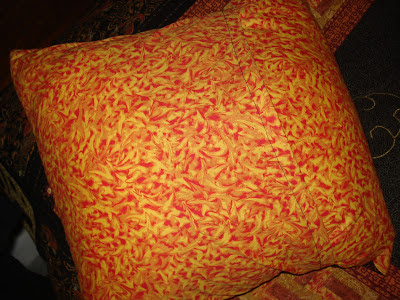 This is the fabric Kieran chose for the back (as I didn't have enough of the black with red characters). This ties in nicely with the quilt too as its in the border (in very tiny pieces) around the dragon.  It felt nice and flamey for a dragon quilt! 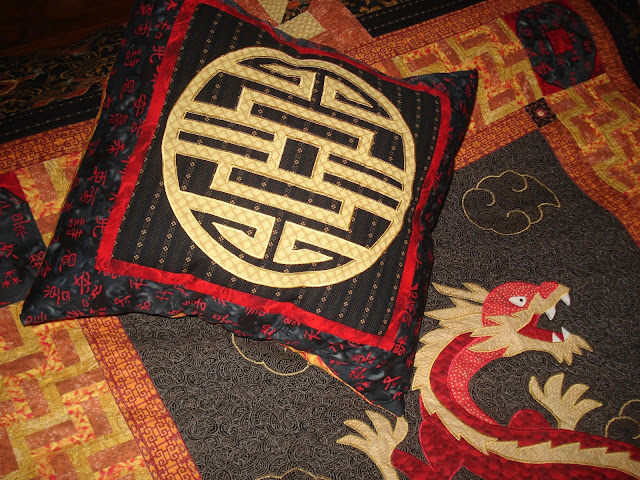 It won't actually end up on the bed though as Kieran has couch in his room so that's where it is now but it does all tie in nicely.

So two UFO's for this month.  You know the best bit about finishing these two pillows? I don't have to keep moving the two pillow inserts to get to my sewing machine all the damn time!

I love Marti's UFO sew along. Its so much easier just knowing that you're going to get at least one project done and dusted each month, whereas a list just feels so daunting and you don't know where to start.
Off to pick another UFO to take this one's spot - Yay!