Eeek! Its the end of September already?! I'm really not sure where that month went, I'm sure I missed some of it. Well my UFO project this month was to finish my Mariner's Compass quilt which I started last month (and need to have finished by mid November) and while I've made quite a bit of progress its not quite a flimsy yet (although I might still just get it finished in time). 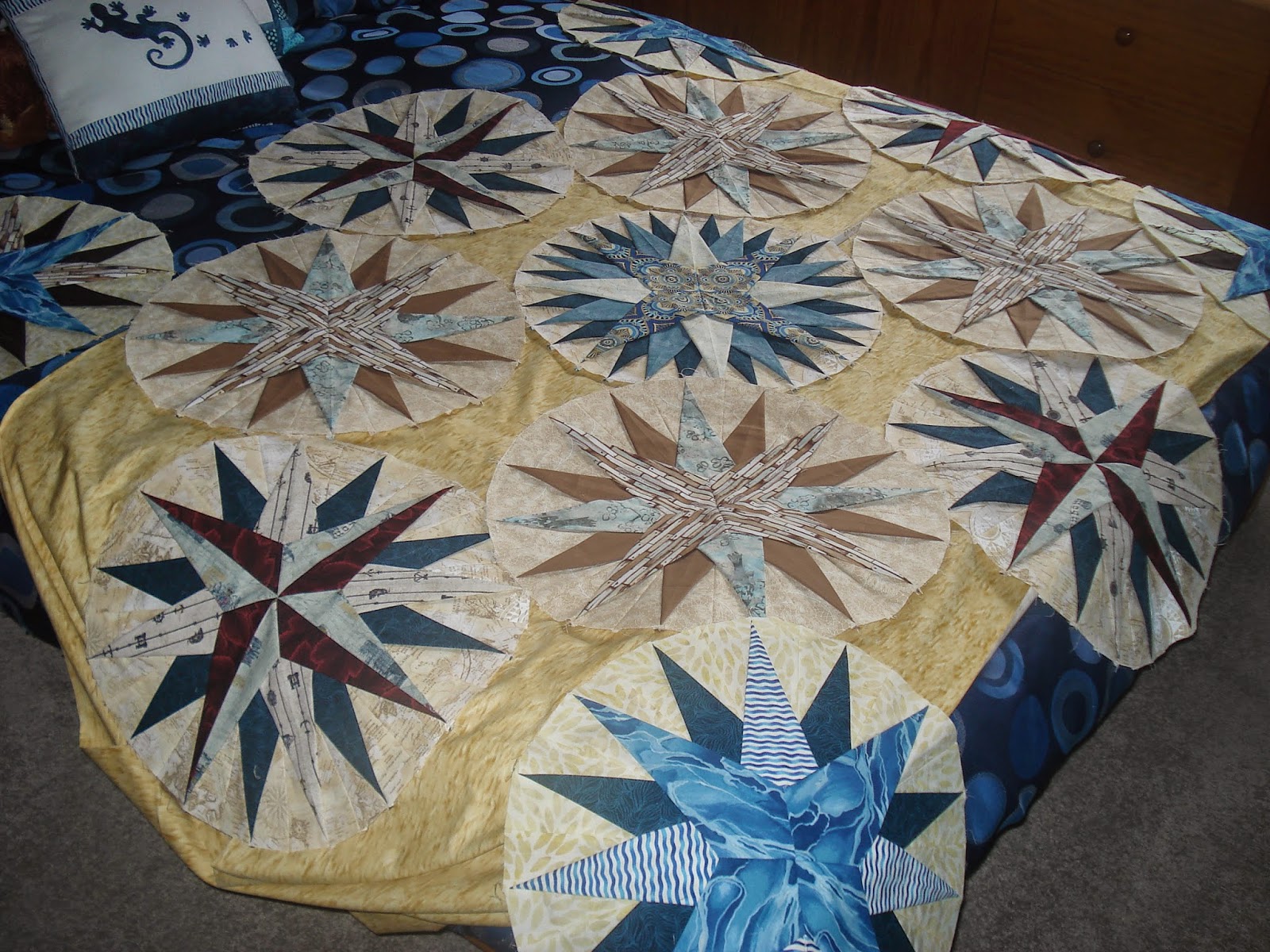 All was going well until I came to the setting triangles, which I cut to the instructions included in the ruler set. That's when I discovered that the instructions weren't quite right and I needed a second 29" square of fabric to cut into four. Needless to say I didn't have enough!  So back to Spotlight to get some more, fingers crossed it was still there. Happily they still had some so I bought the remaining 2.2 metres on the roll to allow for binding and perhaps to use on a cushion or two. 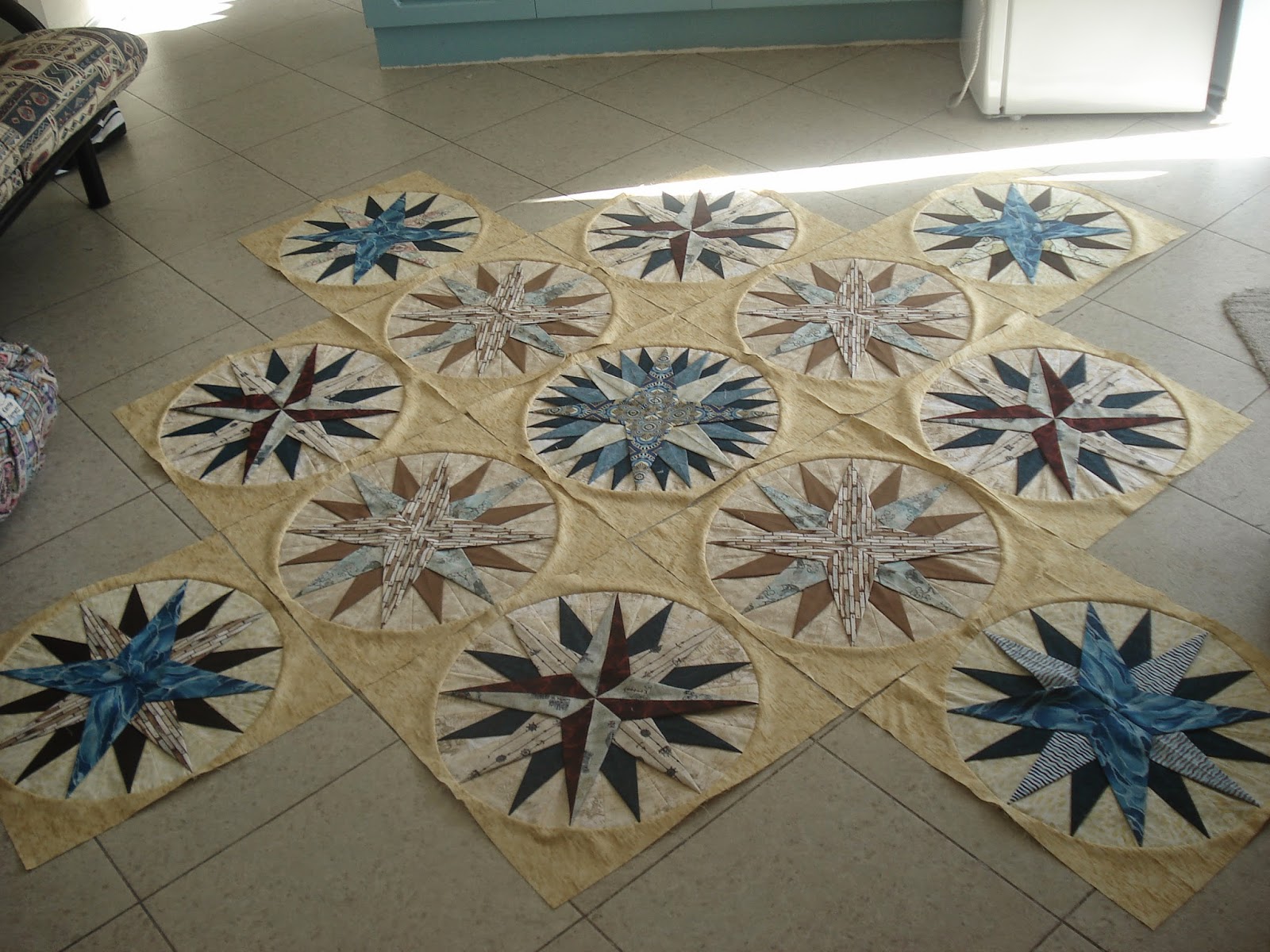 I also bought some plain navy blue wideback for backing and merrily threw both it and the other fabric into the machine to wash (I know, I know you can see what's going to happen can't you!) along with 4 colour catchers. When I went to take it out, disaster! The poor colour catchers were completely filled with navy blue and so the rest of the dye went into the sand colour fabric. Aaaagh!

I re-washed the sandy coloured fabric with colour catchers multiple times and while it improved, it really didn't come right enough to use with what I had. I also re-washed the navy trying to set the colour but after 4 rinses the colour was still coming out - not suitable for a quilt. I contacted Spotlight by email (it was a Sunday evening by this time) and had a response the next day. Irene at the Adelaide store was delightful and not only replaced the fabric with a more expensive alternative backing (this time in a light colour - I'm not being caught twice!) but also the other fabric which had been affected by the dye.

So after a wasted week I managed to get my remaining setting squares cut and got the blocks sewn into rows at least. I was not really helped by my dog being determined to plonk down on them the minute they hit the ground! The quilt is so big the lounge room floor is the only place I can put it but even then its not a great fit. I just wanted to make sure I had the blocks all pointing in the right direction as the background fabric has directional lines on it. 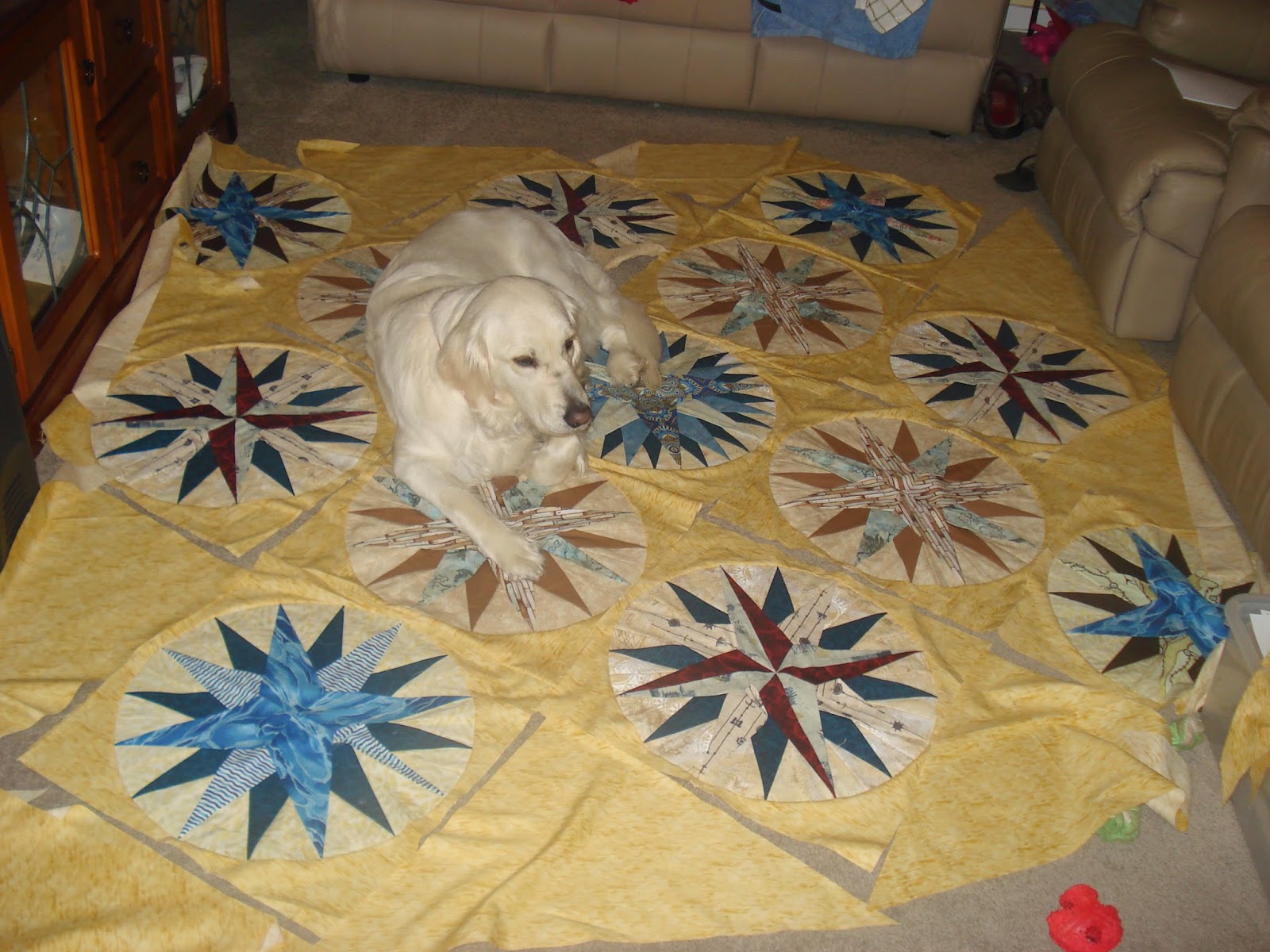 I'm not even thinking about how I'm going to quilt this monster. Hopefully I can get it to go through my little old Janome - I'll cross that bridge when I come to it!

I thought I would share a photo of the back of one of the blocks to show how relatively easy they are to put together compared to a more traditionally pieced mariner's star.  Its all lovely straight lines, nothing too hard in that! 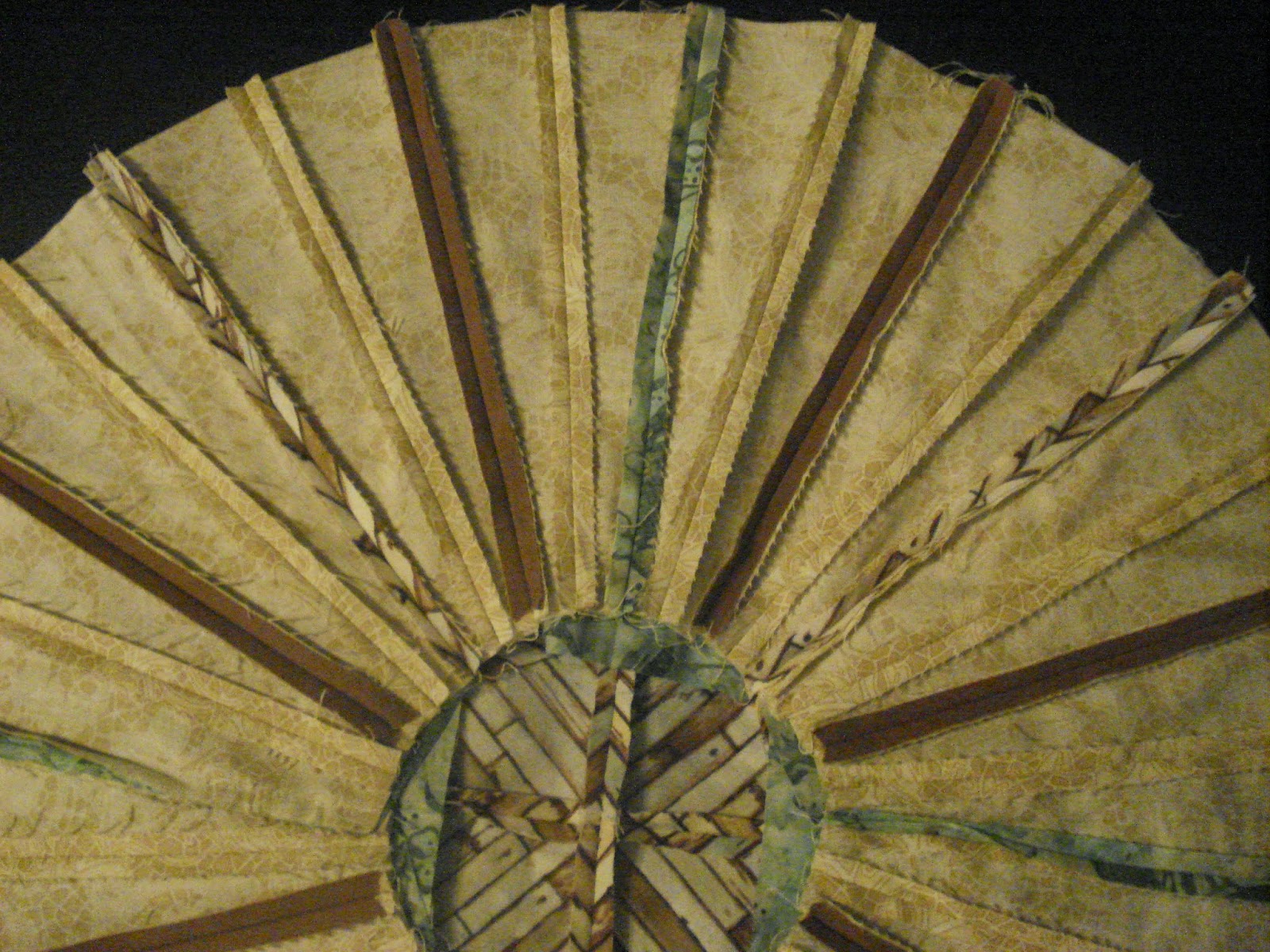 Technically the Mariner's Compass was my August UFO project and September should have been to continue making some crumb blocks from my small scraps. Well thanks to not having fabric to go on with my MC quilt I did actually get a few of those done as well! 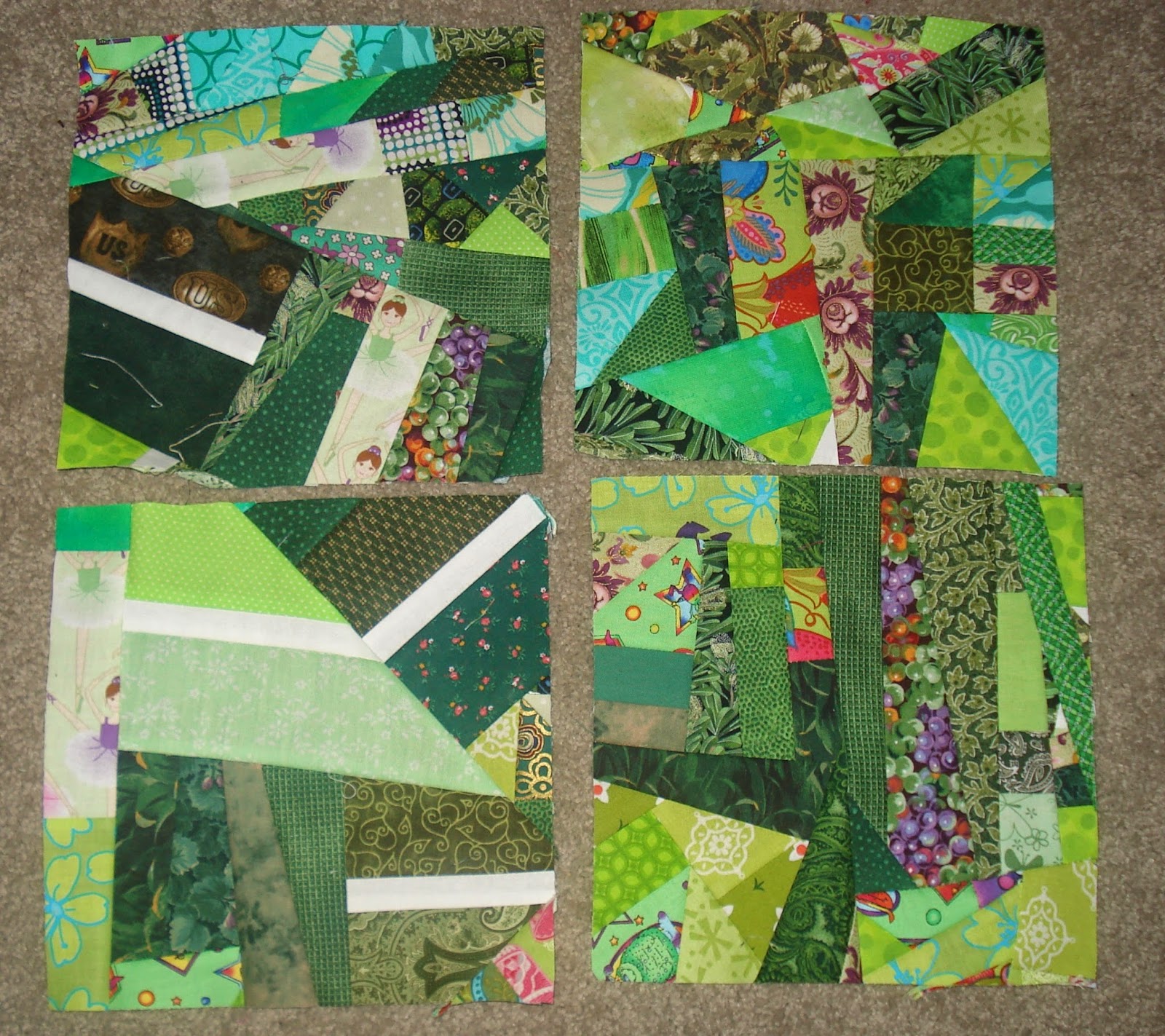 My little collection of these 8.5 inch blocks is growing slowly. 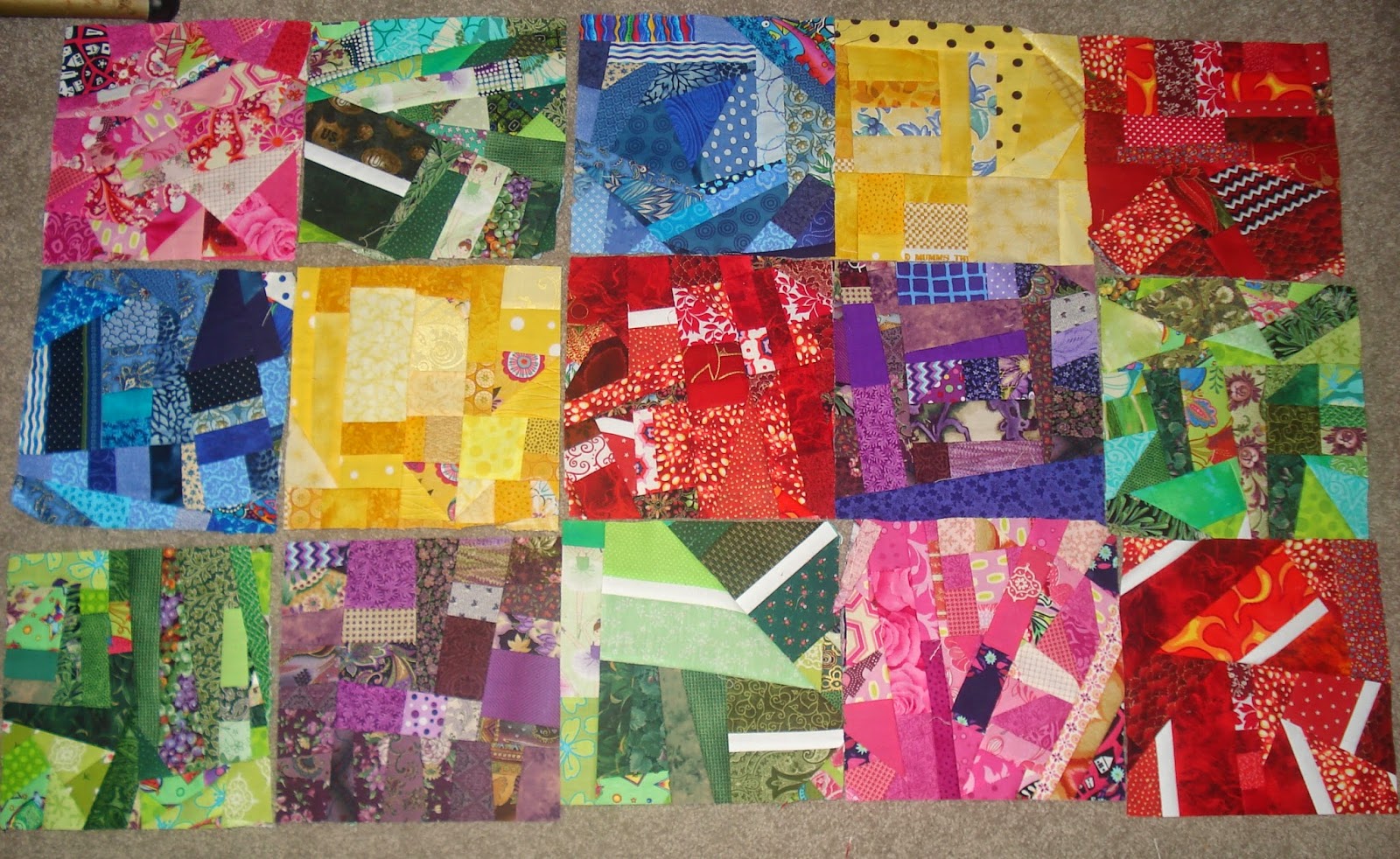 I plan to border them with another colour, probably black, before I put them together into a quilt.  I love them because they are made from all my pieces which are too small for anything else so they are free to make (other than a bit of time and thread)! I'm nothing if not frugal!

***Update***
I managed to get the Mariner's Compass flimsy all together at last on the 1st of the month but I figure its probably still 30th September somewhere in world so I think it counts as a finish for September!
Here it is laid over my queen size water bed. Its a big quilt! (I'm actually standing on a cupboard to take this shot!) 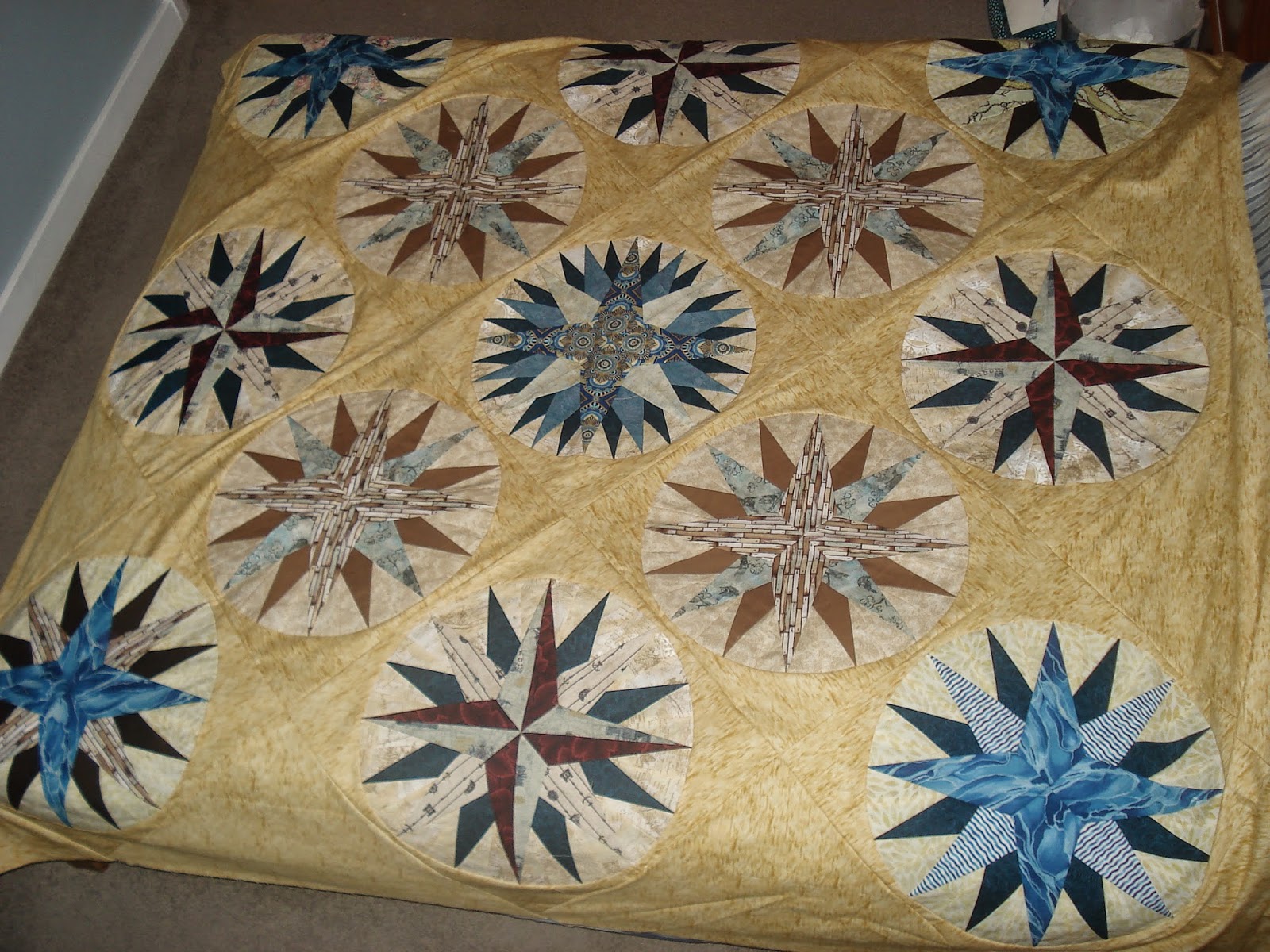 My dog was somewhat frustrated that she couldn't sit on it  - see her in the top corner in this shot?! No fair Mum! 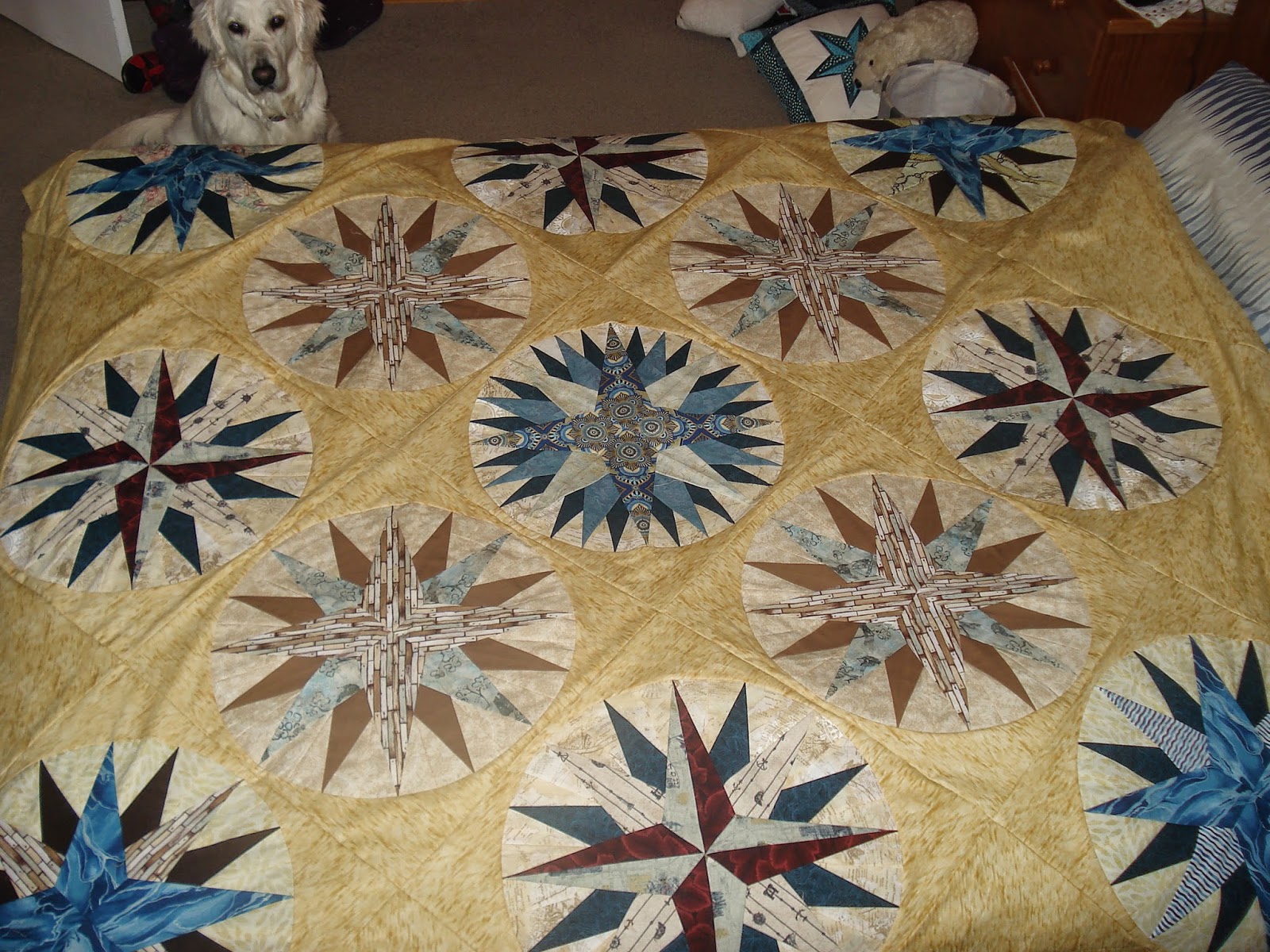 Thanks for visiting my blog today!