I know I haven't been blogging much just lately and that's because I had a tight deadline to finish quilting my Folded Mariner's Compass quilt for my brother's 60th birthday on the 15th of November. Every chance I had I was on my trusty Janome, quilting my fingers off and now its done with two days to spare! 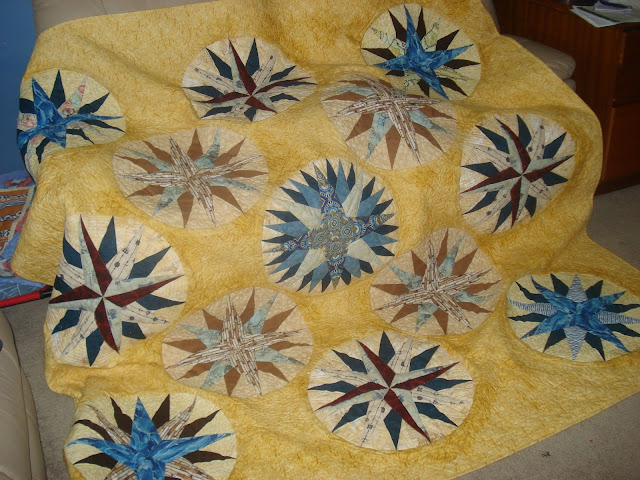 I must admit that when I first started I was sure I had bitten off more than I could chew this time but once I had stitched in the ditch between the blocks and could start on individual blocks it got a bit easier. The quilt ended up being 81" square and the throat on my machine is 6.5"! The centre block was a real challenge as because I had added in extra points in this block there was lots of fabric in it, as well as being the hardest part of the quilt to get to!  I had some thread breakage and bent a needle or two but managed to get it done. 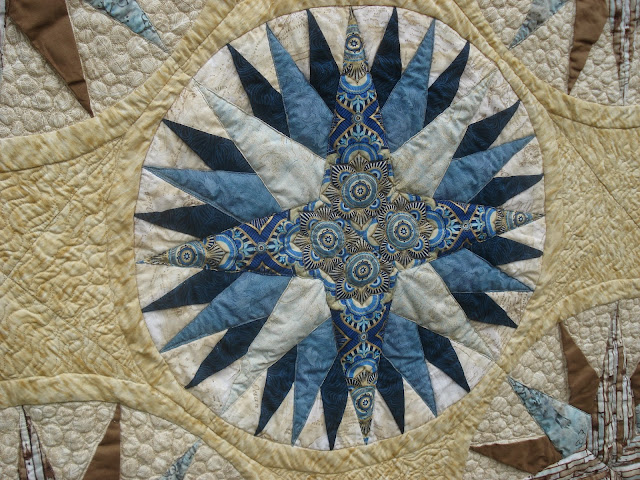 I quilted each of these four blocks with a slightly different pattern around the outside of the stars. 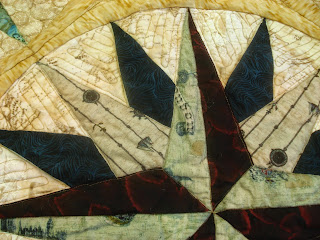 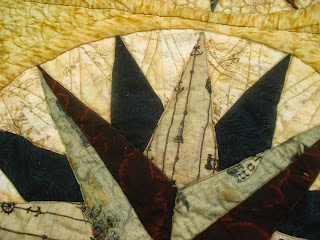 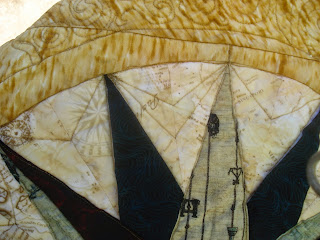 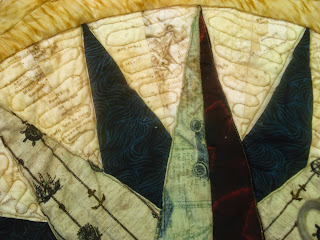 These are my favourite blocks and I quilted each the same. 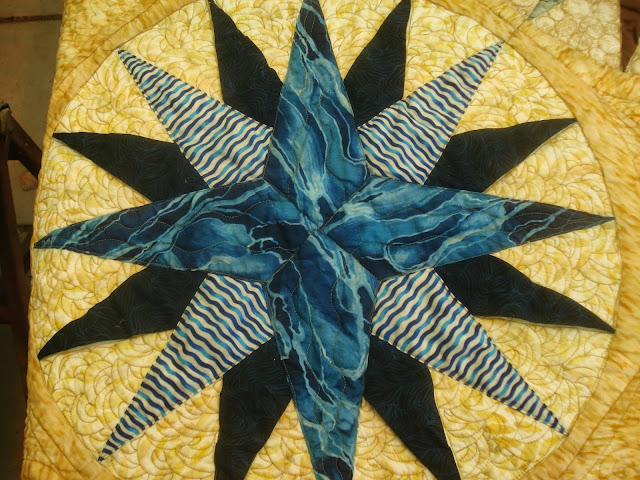 The quilting shows up better on the back: 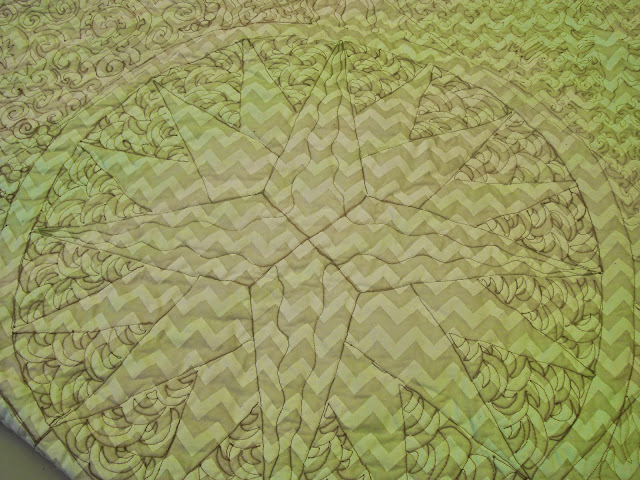 I took these photos while the quilt was still wet after washing as it makes it easier to see the quilting. For the quilting between the compasses at the edge and on the corners I chose to use designs to reflect aspects of my brother's life. They included a jet flying around the world (he likes to travel): 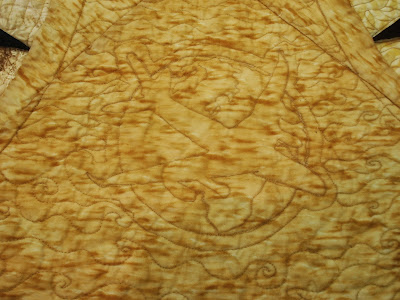 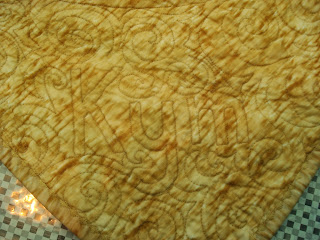 him riding his bike: 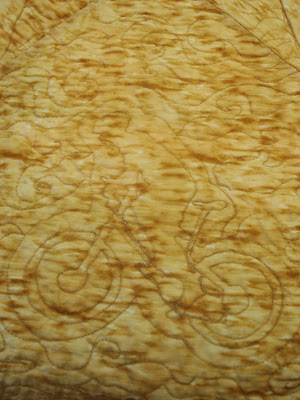 the boat our family owned when we were growing up: 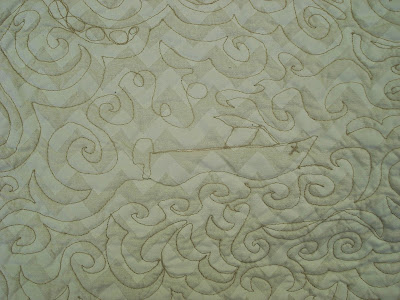 a couple of spanners and some cog wheels (he used to be a diesel mechanic): 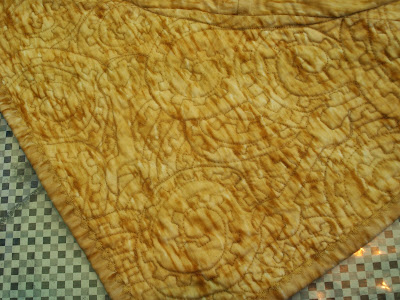 his Lazy E sailboat he used to own: 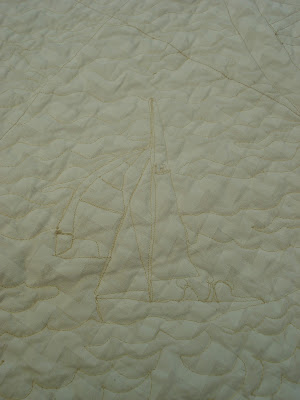 a jetty to remind him of living near the Semaphore jetty: 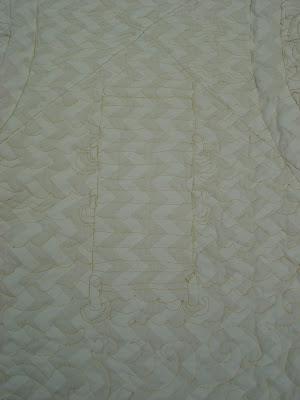 and of course he's a Scorpio! 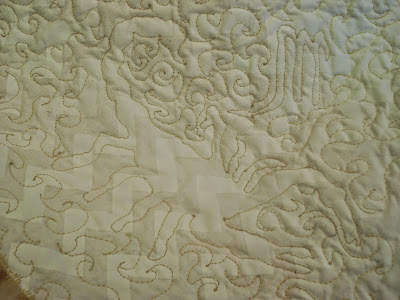 Here it is in full in what is more like the actual colour of the quilt: 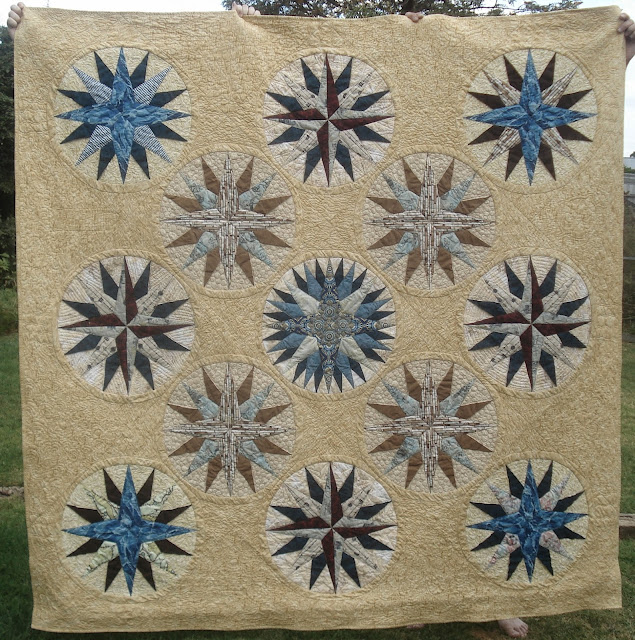 and here's the back - upside down but I wasn't about to argue with my two tall helpers who were quickly losing interest! 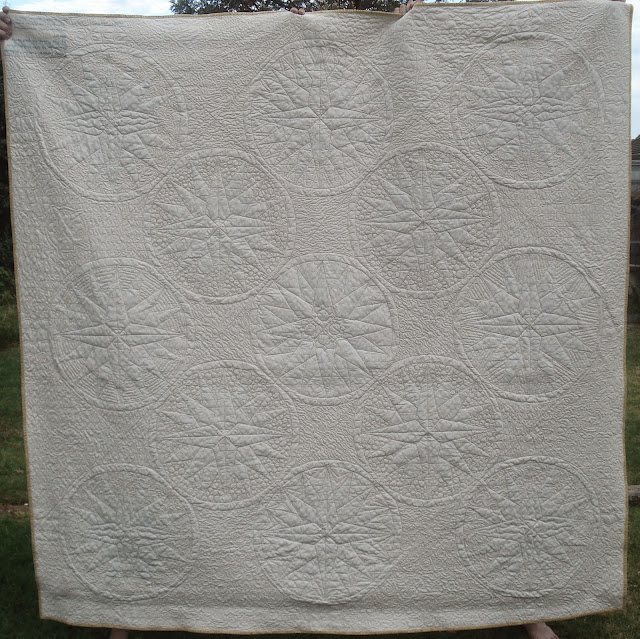 I'm really happy with this quilt, it was a labour of love for my brother and I'm sure he's going to love it. I've made up an I Spy list of things for him to find in the quilting! It has plenty of mistakes and stitches where they don't belong but its not a show quilt and I didn't have time to be super fussy and unpick unless I really had to.

For this quilt I used Wonderfil Konfetti 400 Gold and used two full spools. Unfortunately I needed more than that so when it became clear I didn't have enough for the whole quilt and I couldn't get any more in Adelaide I had to resort to Gutermans in a similar colour for the bobbin. I had just enough of the Wonderfil to use on the top and topstitch the binding down, phew!

Have you used Wonderfil Konfetti? I found it seemed to make a LOT of fluff in my bobbin. In fact I had to do a full clean halfway through the quilting and again when I finished.  It was really packed in there. Here's my before and after photos: 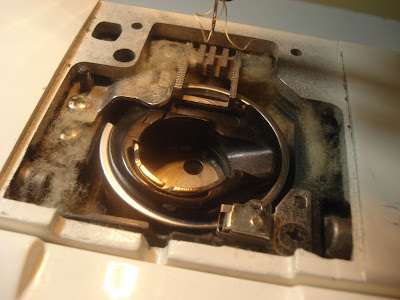 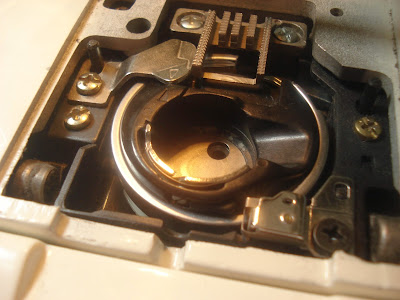 It was everywhere, even up in the top part of the machine too. Not sure I'll be using it again. Back to Aurifil I think.

I'm so glad this quilt is finished. Now I can go and catch up on all the things I didn't do while I've been quilting like a demon!