My No. 11 project was to make something using this Union Jack block I made while I was testing a tutorial (which you can find here) for Josh, better known in blogland as Molli Sparkles! 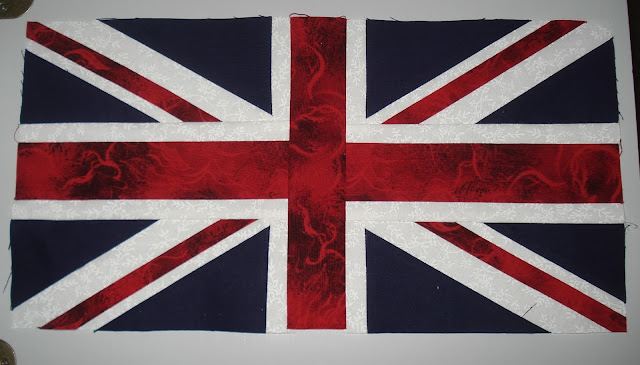 ﻿
My niece (who has dual British and Australian citizenship) is currently working in London and I felt this was definitely something that needed to go to her.  After pondering ideas during the year I decided to use it to make a Passport Wallet using this pattern.  It did mean cutting it back a bit but I hoped it would still look okay.  To be on the safe side I made a test project first using the pattern and boy am I glad I did!

The issue was not so much with the pattern as the thickness of the interfacing I was trying to use.  Given the pattern called for heavy weight interfacing, off I went to purchase same seeing as I didn't have any.  I happily started making it as per instructions and then when it came to turning it all the right way round it came to a screeching halt - the interfacing was way too thick (which I thought as I was putting it together but persevered anyway, duh!)  No photos of this stage as I was too annoyed with it!  There may have been some unconfirmed swearing at this point.
Nevertheless I did not give up but went and purchased some medium weight interfacing and started over, reusing some of the interior bits.  I initially tried to use the interior pockets which had the thicker interfacing but had to give up on that idea as the whole thing wouldn't sit flat -  more swearing and unpicking!  So third time lucky, and only reusing the smaller inside bits..... success! Much better results this time around: 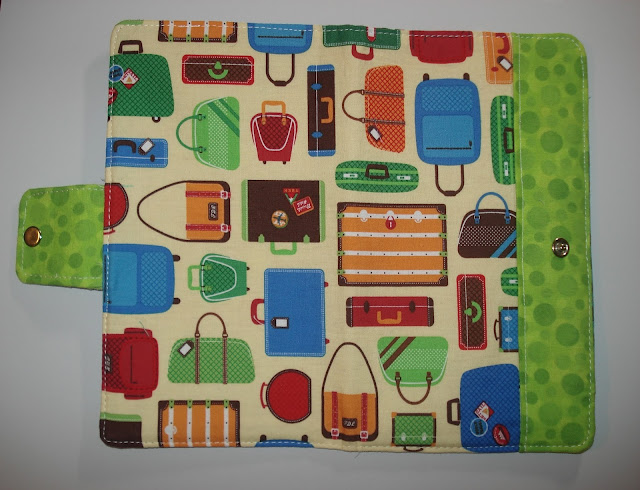 Pretty happy with this little internal pocket, its the first time I have ever put a snap onto anything! 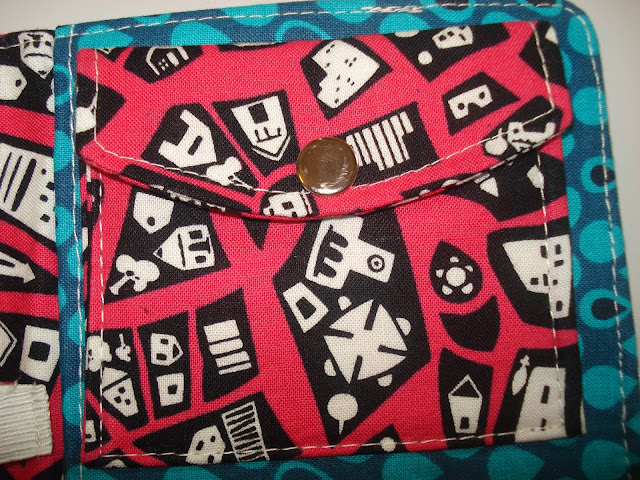 Don't you think this fabric is just perfect for a passport wallet? This bit even has an Australian stamp on it! 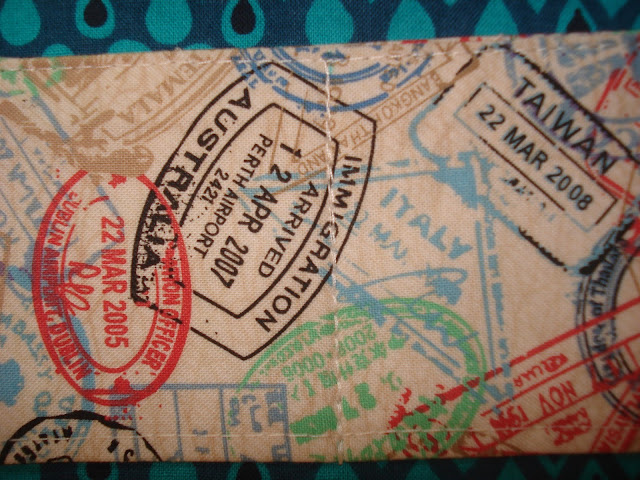 I thought I had taken a photo of the inside of the wallet but apparently not now that I've uploaded the photos - doh!

Anyhoo, now that I had a model to look at I decided that my Union Jack would still work in this project.  I did need to add a bit of contrast to get the width right and lose a bit off the ends but all in all I'm pretty happy with it! 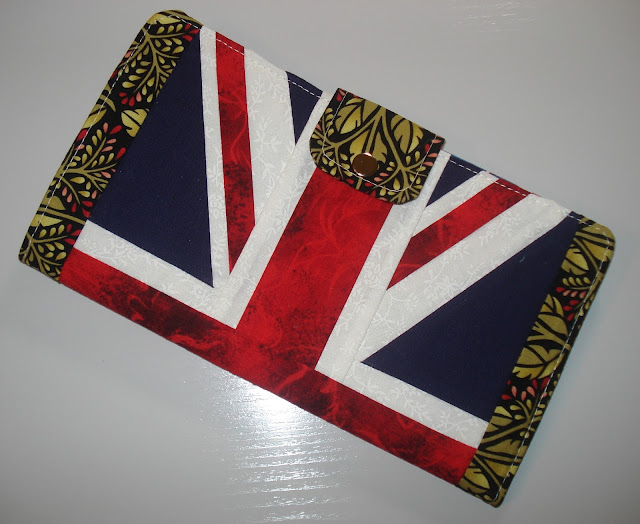 Now this one I do have a photo of the inside.  There's a spot for your passport (obviously!), airline tickets, itinerary, credit/business cards, a coin purse and even a loop for a pen! 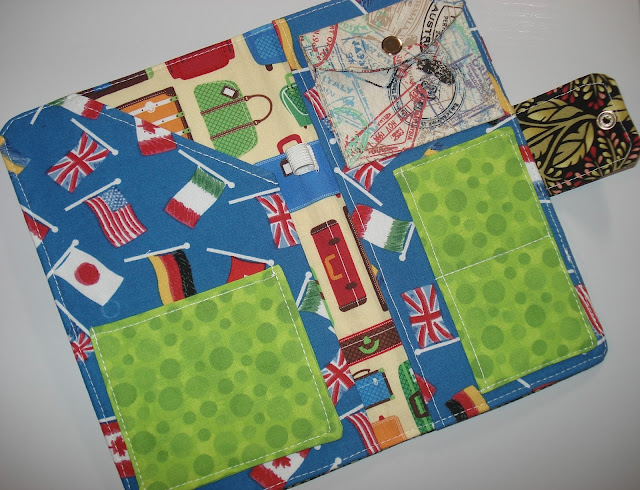 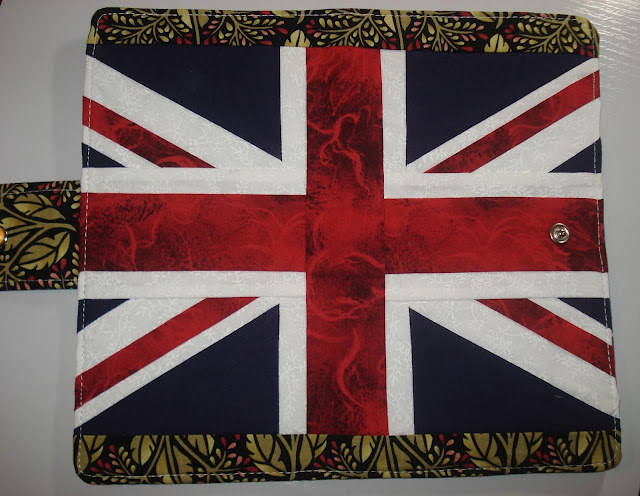 The good news is that the original one will not go to waste as my brother (father of said London living niece!) is heading over on holiday to Malta and other exotic European locations early next month so I'm going to give it to him to use.  There is an element of bribery there though as guess who I'll be asking to deliver the Union Jack version to my niece when they meet up in Malta?  It will be an early birthday pressie as her birthday is in late September. 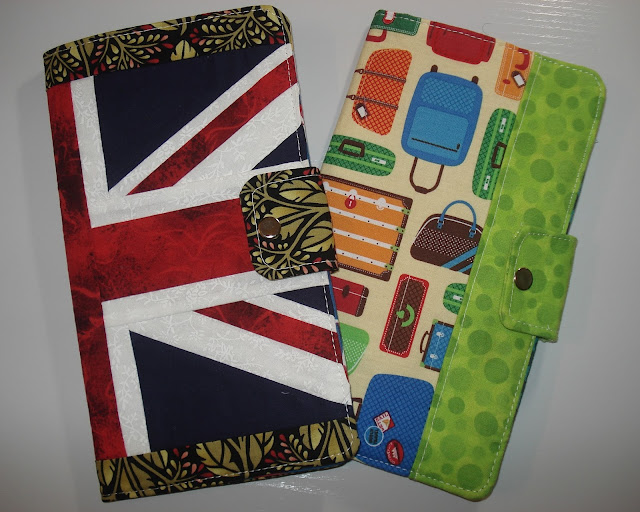 So there we go, two for the price of one this month (more or less!).
Thanks for visiting today,
﻿